Home/Attractions/Salamis is an ancient city in Northern Cyprus

Salamis is an ancient city in Northern Cyprus

Those who are not indifferent to historical, archaeological attractionsyou should definitely visit the ruins of the city of Salamis near Famagusta. The tour will make an indelible impression on you, making you go back several thousand years and marvel at the skill of ancient sculptors and architects.

History of the city of Salamis

The founder of the city is considered to be the archer Teucer, a hero of the Trojan War and the son of Telamon. the site of the city's founding was not chosen by chance: the harbor located in this area could accommodate an entire fleet.

Teucer's homeland was the island of salamis, but after returning from the war, the hero was expelled from there by his father, because he could not protect his brother ajax. teucer sailed to cyprus and decided to build a city, which he later named after his homeland salamis. In those days the town was a thriving sea port, through which the active trade was conducted with Egypt, Cilicia and Phoenicia. The inhabitants of the city were brave warriors. throughout its history the city of Salamis it was often subjected to serious tests in the form of destructive wars and earthquakes.

Some of the largest earthquakes occurred in 332 and 342 BC. As a result, many buildings were destroyed, and part of the city completely went under water. A few years later, during the reign of Emperor Constantine, Salamis was rebuilt again, and the capital was moved here from Paphos (because Paphos was even more affected by earthquakes). along with the new appearance, the city acquired a new name – constance. In 45 AD, the apostles Paul and Barnabas were active in preaching here, and the Christian faith spread from Constantia to the entire island.

However, the second flourishing ended sadly: in 647, the city was subjected to a brutal attack, was looted and destroyed. The inhabitants left their homes, and from that time Salamis officially ceased to exist.

Currently, archaeologists have discovered more than 5 square kilometers of the ancient city, but this is only a small part of the ancient mysteries that keep the land near Famagusta. 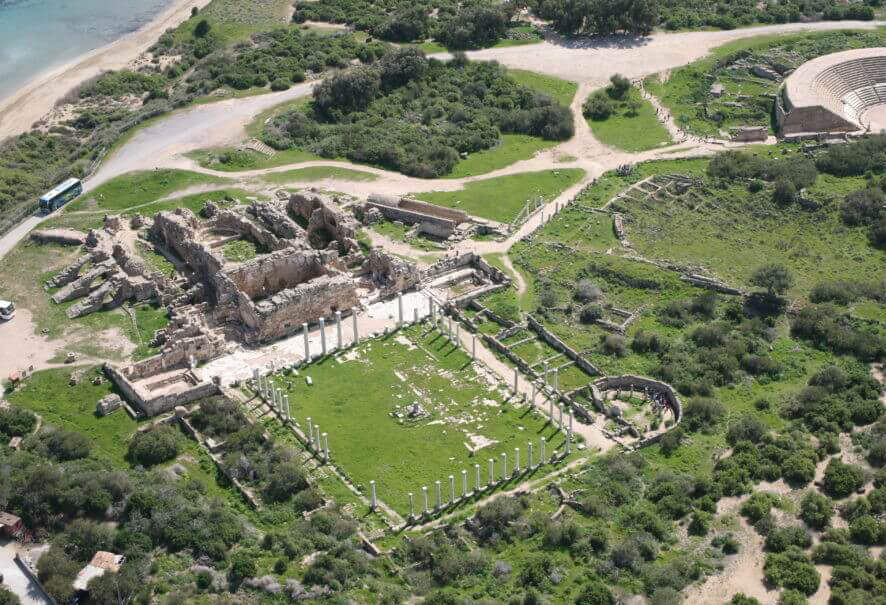 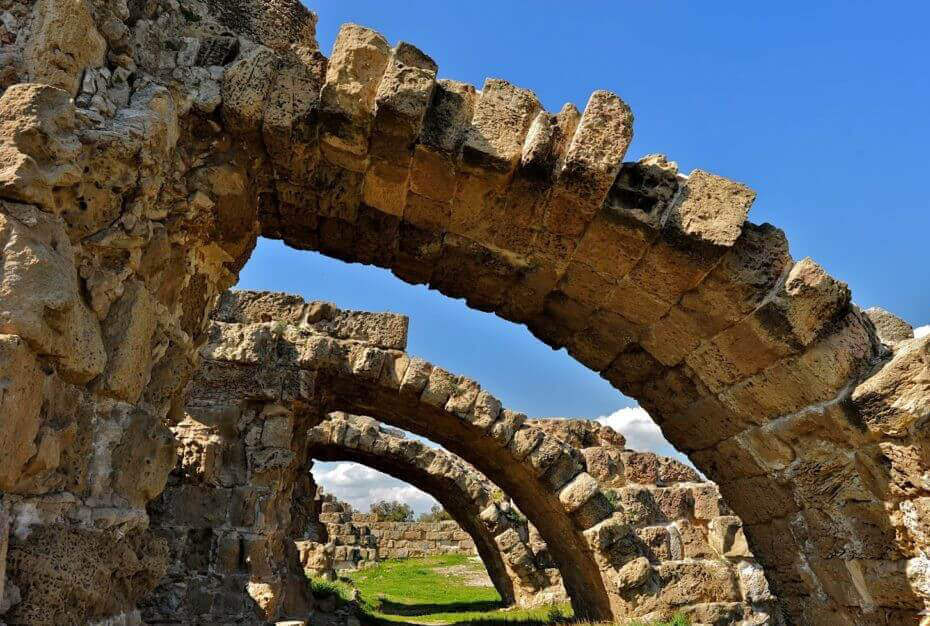 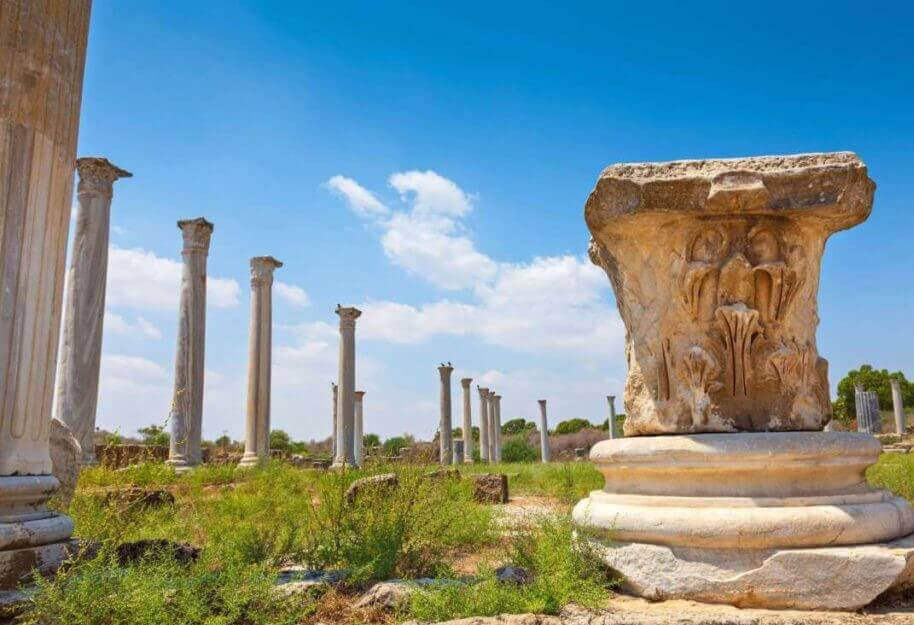 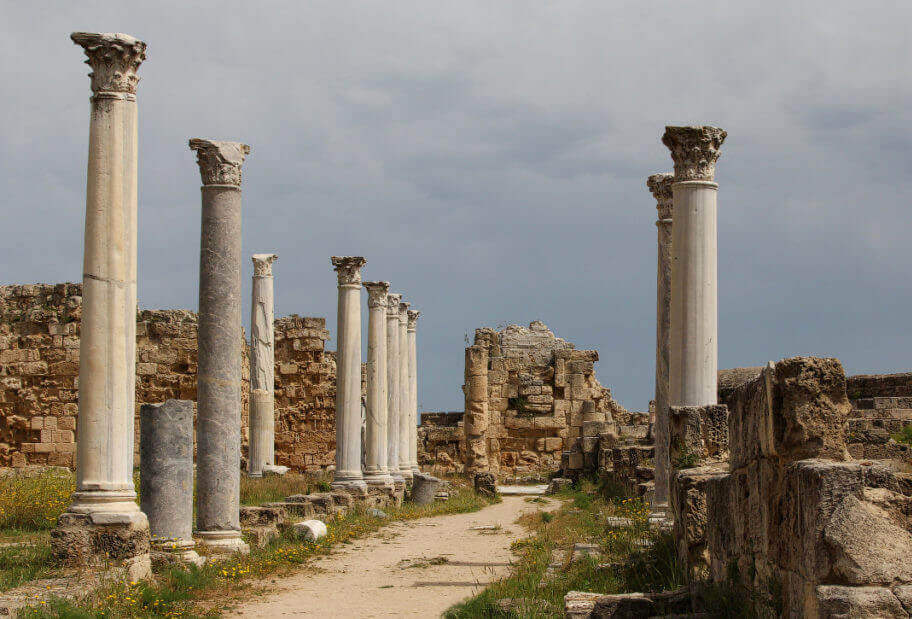 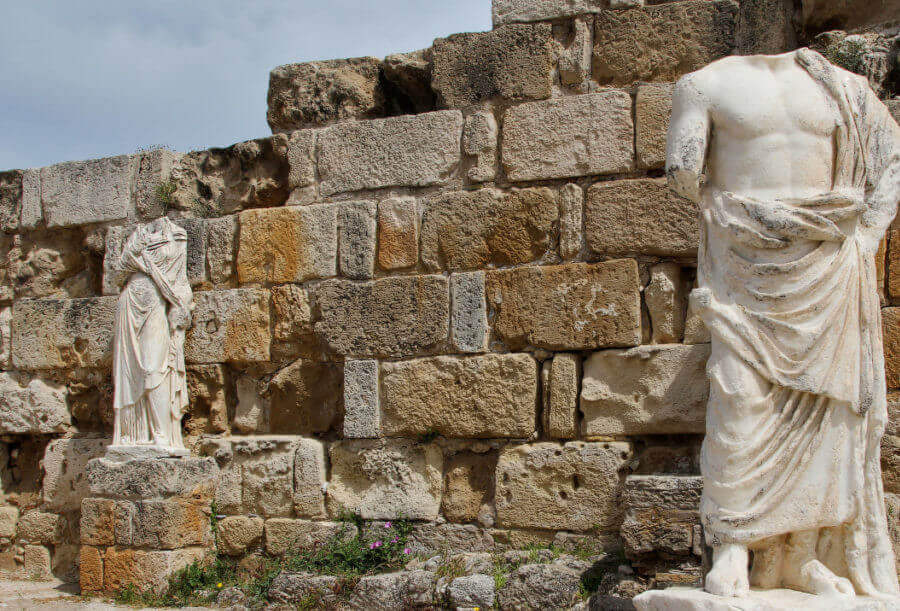 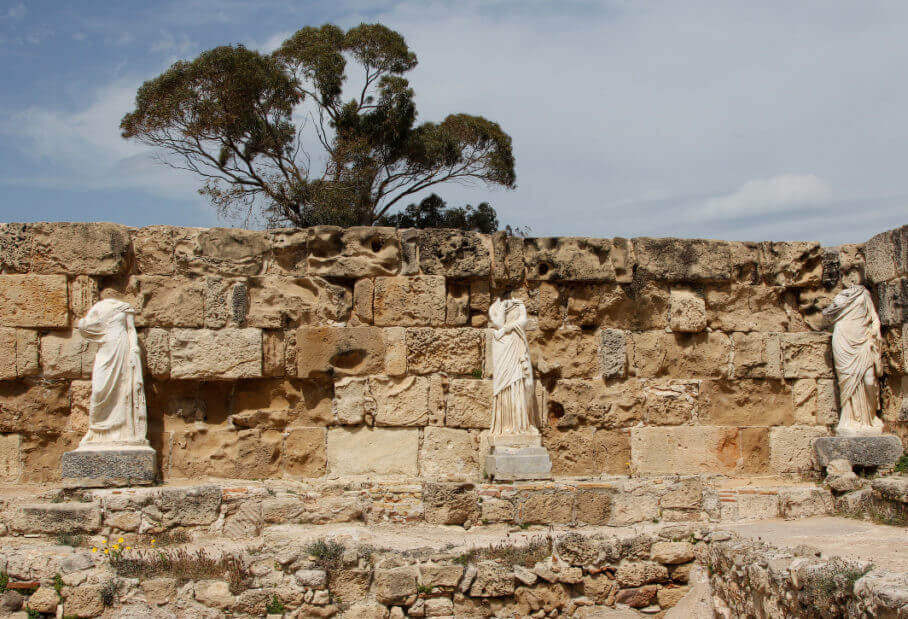 Salamis City Tour: what can you see among the ruins of the ancient polis?

Today, this landmark of the ancient city is evidenced by a thick, lonely pillar. The city square of Salamis was the largest of all the Hellenic cities. The square was shaped like a rectangle, with columns and arches built on either side. In ancient times, the square was adjacent to the temple of Zeus, and on the opposite side was the temple of Hermes. The square was decorated with golden statues, and fountains were beating in the center of it.

Today, you can also see the columns that framed the square, as well as a water tank surrounded by a brick wall. In ancient times, water reserves were stored here in case of earthquakes or other disasters.

Roman amphitheatre and temple of Apollo

In the area of the columns was once the Roman gymnasium – the largest building in the city. From the 4th century, the gymnasium was used as a public bath. These were baths with a high level of comfort: already at that time there was water supply, heating, sewerage. The entire complex consisted of rooms with cold water, as well as swimming pools, steam rooms, halls with hot baths.

Reminders of the ancient baths have come down to our days in the form of frescoes and mosaics. One of the frescoes depicts a friend of Hercules surrounded by nymphs, the mosaics in the steam rooms depict Apollo, the goddess Leda, Zeus.

The Amphitheatre Of Salamis

Salamis was once home to the largest amphitheater in the entire Mediterranean. It consisted of 50 spectator rows and could accommodate up to 15 thousand people. The difference between the upper row and the arena is 20 m. Today, tourists see the already recreated amphitheater, which has only the first few rows of relatives. Nevertheless, the scale of the structure is impressive! From the upper rows of the theater offers a beautiful view of the entire ancient city: all the buildings are visible at a glance.

South of the theater, you can see another attraction – an ancient Roman villa. In the ornate building once housed the living rooms and the floors were paved with mosaics. In the villa there was a huge stone press, apparently used for pressing olive oil.

Salamis was once home to the largest amphitheater in the entire Mediterranean. It consisted of 50 spectator rows and could accommodate up to 15 thousand people. The difference between the upper row and the arena is 20 m. Today, tourists see the already recreated amphitheater, which has only the first few rows of relatives. Nevertheless, the scale of the structure is impressive! From the upper rows of the theater offers a beautiful view of the entire ancient city: all the buildings are visible at a glance.

South of the theater, you can see another attraction – an ancient Roman villa. In the ornate building once housed the living rooms and the floors were paved with mosaics. In the villa there was a huge stone press, apparently used for pressing olive oil.

The Basilica Of Salamis

Near the Roman villa and water tank stood the basilica of the Palestinian priest St. Epiphanius, once considered the largest in Cyprus. Today, only a rectangular base and fragments of columns remain, only in one place a fragment of the mosaic floor miraculously survived. The basilica was built on the site of the saint's burial, but later his relics were transported to Constantinople.

In the South-Eastern part of Salamis, there was still another Basilica built in honor of Kampanopetra. Only fragments of its walls, as well as mosaic ornaments on the floor, have survived to this day. Not far from the basilica of Campanopetra are the ruins of a Byzantine temple, from which small pools have been preserved. Experts believe that this was the baptismal font for baptism.

On the way to Salamis, you can see a crypt built of stone and having a semicircular roof. During excavations in the crypt, a horse team and the skeletons of two horses were discovered. According to the ritual traditions of that time, together with the deceased, they buried what could be useful to him in the afterlife. Legend has it that it was built for the Egyptian Saint Catherine, who was executed in Alexandria. On maps and tourist brochures, this crypt is marked at number 50.

To the west of Salamis is an ancient necropolis, which unites more than 150 graves dating from the 8th-7th centuries BC. Most of these tombs were looted before the discovery by archaeologists. The artifacts that were still found were transferred to the Museum of Nicosia. Of particular interest are the rock tombs Selarka, which was buried less notable people. On the ancient steps you can go down deep into the tomb and see a small cave carved into the rock with stone urns. In these urns, the dead were left until decomposition, and the bones were subsequently transferred to another place.

How to get to Salamis

Salamis is located near Famagusta, so getting to it will be inexpensive even by taxi. If you go by rented car, then in Famagusta you need to go to the ring with the obelisk, turn left and continue driving parallel to the sea and the fortress wall. After about 8 km from the obelisk, there will be a turn to Salamis. After another kilometer, there will be a parking lot for cars.

Visiting the attraction is paid, so do not forget to take the money. At the entrance, after buying a ticket, tourists are given a booklet with a map showing the main sights of the ancient city.

wpDiscuz
1
0
Leave a comment! Write what you think about the article.x
()
x
| Reply
Go to Top